A Brief History of the Pultec Company

This is based upon an interview with Eugene Shenk, one of the two co-founders and owners of Pultec, a producer of professional audio studio equipment from 1953 until 1981. The Interview took place on April 17th and 18th, 1996. To understand the founding and history of Pultec, it is necessary to discuss the backgrounds of the principals before Pultec’s founding in 1953.

Eugene was born on April 1, 1918, in Delphos, Ohio. He had an early intense interest in radio and electronics that was well developed from the third grade onward. Through his high school years he maintained a radio repair shop in his parents’ house, and became a sales dealer for American Bosch radios, as well as Gibson refrigerator-freezers. When he completed high school in 1936, he hoped to set up a shop in downtown Delphos for his growing business. His father, however, had bigger plans for him. He told young Eugene that if he really was interested in electronics as a life’s career after one more year, he would then send Eugene to a professional electronics school. An additional stipulation was that Eugene should keep his electronics shop at the family house during that year. Eugene, with the assurance of youth, felt there was little he did not already know about electronics, but agreed to his father’s plan.

During that year, Eugene and his parents considered at least five electronics schools. The decision came down to the RCA Institutes which had schools in Chicago and New York. Chicago was closer, but Eugene’s dad felt that the New York school might get preference from RCA in some ways. New York was the choice, and so nineteen year old Eugene headed for the “Big Apple” in August of 1937. 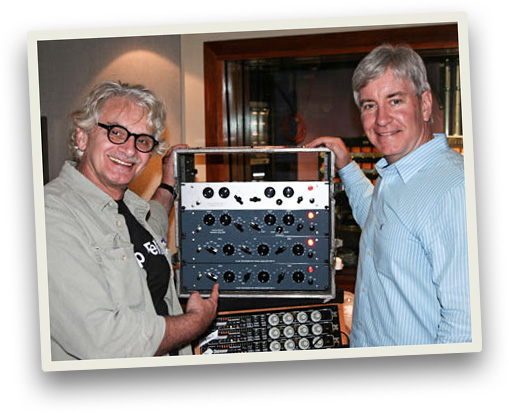 In early 2000, when first considering a recreation of the Pultec design, Ph.D. Electrical Engineer and Materials Scientist Steve Jackson committed to faithfully recreate Eugene Shenk’s original Pultec with no compromise or “enhancement” of the original design. When it was impossible to source an original component, Steve painstakingly and meticulously conducted electrical, mechanical and chemical characterizations to precisely determine the original component’s specifications to build custom replacements. Thanks in part to numerous conversations with and guidance and encouragement from Eugene Shenk over the 10-year process, Steve finally achieved the goal of faithfully recreating one of the “Holy Grails” of professional recording equipment, the Pulse Techniques (Pultec) EQP-1A3 Program Equalizer.

Steve’s determination and hard work have been rewarded through the acknowledgement by many of the major players in the recording industry that his products are indeed real Pultecs. Steve has continued to expand the product line to include the popular MEQ-5 midrange EQ, the API 2520 line amp versions of the EQP-1A3 and MEQ-5, and a full line of mastering products.

Sign up here to stay up-to-speed on all things Pultec!

We will not share your address and you can unsubscribe at any time.